Chapter 3: The Dartmouth Skiway.
A walk up to Holts Ledge in summer makes for good exercise, affords a nice regional view from the top, and provides an excellent example of the power of inference in geology. Holts Ledge can be accessed by climbing the skiway trails across from the McLane Family Lodge. At first glance all one sees is forest and bush. For a geologist, however, the rock is what it is all about. The rocks one will find here are all lower Paleozoic in age and, in sequence from older to younger, include i) a massively thick, Ordovician-age, felsic gneiss (the ‘Holts Ledge gneiss’), ii) Ammonoosuc volcanics (Ordovician-age, metamorphosed mixed mafic and felsic volcanic rocks as well as deep-sea muds and sands), iii) thin Ordovician-age dikes, or seams, of granite, and iv) the Silurian-age Clough Formation, a quartzite. Look for the exposures of rock as you climb. At the base of the ski trails along the road and immediately above, for example, are small outcrops of rocks exhibiting crumbly schistose texture. These rocks are a lower layer of the Holts Ledge Gneiss.
As one climbs up the left- or southernmost trail, Green Pastures, exposures of the crumbly textures seen at the road grade into the stratified and, in places, massive Holts Ledge Gneiss proper. Upon microscopic and chemical examination of this rock, and comparison with rocks of similar composition and age in the region, geologists reckon that the gneiss is altered from what was originally felsic volcanic rock. In other words, it is likely to be a highly metamorphosed component of the Ammonoosuc volcanics. This interpretation is not necessarily clear-cut, for in places the contact between the Holts Ledge gneiss and Ammonoosuc rocks is quite sharp. 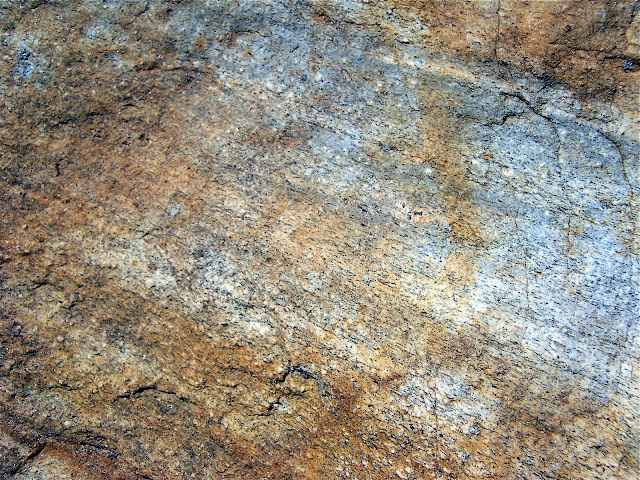 Holt Ledge Gneiss along the Warden Schuss trail, note the typical dark and light banding characteristic of ‘gneissic texture’. Field of view is 1 meter.
What could have caused such intense metamorphism of rocks to gneissic grade within the lower portion of the Ammonoosuc rocks? A clue lies exposed within an outcrop of gneiss found about halfway up the ski trail. Here, one may find at least two separate generations of dikes, or thin seams, of granite, which appear to have intruded into and filled fractures in the existing gneiss. Two generations? This is apparent from the observation that one seam, the younger of two, cuts cleanly across the other. This geometry can occur only if the older intrusion was in place well before the arrival of the more recent intrusion. And, of course, the metamorphosis of the original rock to felsic gneiss must have occurred before the intrusion of either of the intruding, crosscutting dikes. 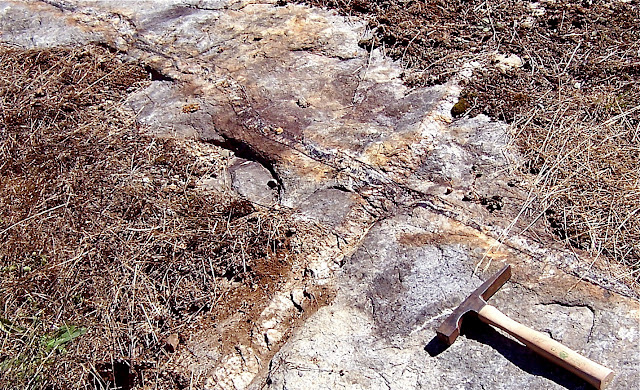 Granite, crosscutting dikes in the Holts Ledge Gneiss. The dike trending from lower right to upper left is intact, and therefore younger than the dike trending from lower left to upper right. Dikes are younger than the gneiss, into which both intrude. Hammer for scale.
Some of the photographs shown here depict the key features to be seen on the way up the ski trail. These include the Holts Ledge gneiss exhibiting its characteristic texture, the crosscutting granite dikes within the gneiss, and the gneiss’s intrusive contact with the overlying Ammonoosic volcanics.
Continuing up the ski trail, one will find outcrops of light-colored Clough quartzite overlying Ammonoosuc rocks. These can be seen, for example, on the upper Papoose Trail. There is no readily found evidence that any granite dikes crosscut the Clough formation. This indicates that the granite intrusions are likely to be older than Silurian in age. Once at the top, follow a footpath to Holts Ledge. Respect the fence. Pause, and reflect on the observations.
Ammonoosuc rocks are underlain by a gneiss which may have been derived in part from the volcanic rocks of the Ammonoosuc formation itself. The Ammonoosuc rocks are mid-Ordovician in age. The gneiss is crosscut by granite dikes, but the overlying, Silurian-age Clough quartzite bears no crosscutting intrusions. Based on these observations and more, geologists infer that at least two; closely timed generations of granite intrusions were emplaced beneath the existing country rock of Ammonoosic muds and mafic volcanics. The tremendous heat and pressure introduced by the intrusions at depth contributed in part to the metamorphic textures exhibited by all rocks in the vicinity of Holts Ledge, including the deepest-lying, gneissic component of Ammonoosuc rocks. The timing of these intrusions was late Ordovician.
The large-scale structure of the intruded granite at depth is dome-like, and it is this underlying, dome shape of erosion resistant granite that gives Holts Ledge ski runs their favorable grade. This particular structure is known as the Mascoma Dome. It is of late Ordovician age, and it extends as far south as Enfield. The prominent lake about 8 km (5 mi) to the south in one’s field of view from the Ledge is Goose Pond, and it more or less marks the core of the Mascoma Dome. 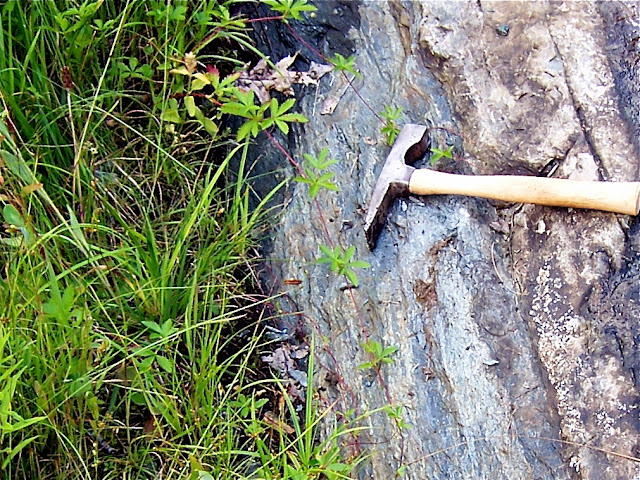 Contact between dark, mafic-rich Ammonoosuc volcanics and Holts Ledge Gneiss on Worden Schuss trail. Hammer for scale.
There are other topographic highs underlain by granite domes in view. The nearby mountain to the northeast is Smarts Mountain, for example, and has the Smarts Mountain dome beneath it. Although not easily pointed out from Holts Ledge, the highlands east of Rte 120 running between Hanover and Lebanon are underlain by yet another granite dome of late Ordovician age, the Lebanon Dome. Outcrops of the Lebanon granite can be seen along Rte 120, and in the vicinity of the Velvet Rocks shelter on the Appalachian Trail east of Hanover. This granite is described in another hike. Twenty km (12 mi) to the SSE is Cardigan Mountain, whose distinctively exposed summit is actually underlain by the Kinsman granite. This rock represents an even younger (Devonian) episode of felsic intrusions, which occurred throughout what is now New Hampshire.
Each of these dome-like intrusions is a pluton, and they may all be interconnected at depth. Multiple, contiguous plutons (whether comprising a single structure at depth or not) make up a batholith (Greek for ‘deep rock’). In many cases, such large bodies of felsic, intrusive rocks are thought to represent the remnants of ancient magma chambers which fed volcanoes far above.
So we have a chain of granite magma chambers in intrusive contact with metamorphosed deep-sea sediments and volcanic rocks. One reasonable modern analogy, perhaps, is the arc of volcanic islands of Indonesia. The island arc is itself the surface manifestation of the subduction of the northbound Australian Plate beneath the Eurasian Plate. The cores of the islands are explosive volcanoes likely fed by vast chambers of felsic magma welling up slowly from the mantle below. All are surrounded by deep-sea sediments and mafic volcanic rocks of oceanic crust. In geologic time, as the Australian and Eurasian continents close, the island arc lying between them will be caught in a tectonic vice and then smeared onto Asia. The resulting regional structure at depth could eventually look something like what we see exposed in the roots of the ancient Appalachians today.
There is one more piece of the story to be told—the effects of the recurring ice sheets that covered the region during the last 2 million years. Consider that these ice sheets reached thicknesses measured in kilometers, and so were much thicker than the hills are high. As the ice sheets advanced southward, they ground smoothly over the upstream, north-facing slopes of hills. Rocks exposed there were polished smooth. In contrast, rocks exposed on lee, or south-facing slopes were subjected to slow but inexorable pulling and plucking, leaving a ragged and relatively steep surface.
The impressive south-facing cliff below Holts Ledge itself is one such cliff. Now consider: the north-facing ski trails are gently sloping north; the steep cliff faces south. Looking farther afield, one will see other examples of asymmetric hills with relative low gradients on north-facing slopes, and relatively steeper gradients on south-facing slopes. Such a landform is called a roche moutonnée (French for ‘sheep back rock’), and this form is common throughout New England. Indeed, the cliff under the lower half of the Holts chair lift is a smaller example of the same effect. 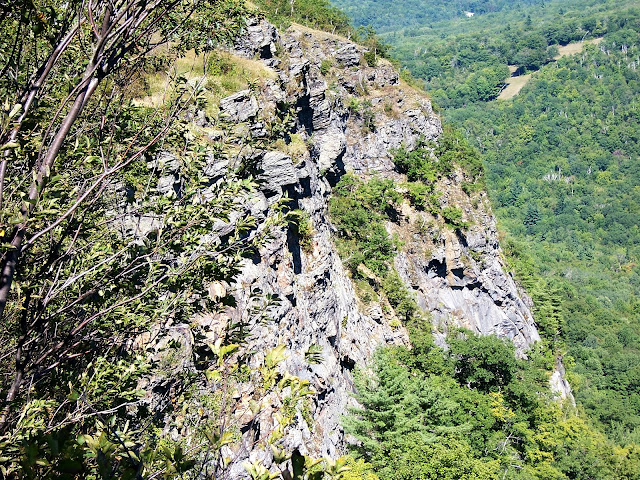 The steep cliff on the southern side of Holts Ledge. Contrast this steepness with the smooth and gentler shape of the ski trails. The rock has been plucked away to sculp the cliff.
When an ice sheet, or continental glacier, plucks up a chunk of bedrock, that chunk is carried southward by the ice and, upon eventual melting of the ice, is abandoned at the point of farthest southward travel. One such displaced chunk is encountered upon descending the Papoose trail from Holts Ledge. About halfway down the trail on the right is a spectacular, truck-sized boulder of granite. The granite in this boulder is known to geologists to have originated from several tens of kilometers to the north, and is Devonian in age (similar to the Kinsman granite, noted above). It is not an example of the Ordovician-age Mascoma granite in place beneath your feet. This magnificent rock and similarly transported chunks abandoned far from home bear the poetic name of glacial erratics.
This particular erratic contains, as shown in the photo below, a fragment of dark rock quite different from the light-colored granite in which it is encased. Look for it on the trailside, near the bottom, of the boulder erratic. This dark fragment is a xenolith (‘foreign rock’) and is a chunk of Devonian–age Littleton schist, a formation also from further north in NH. Such strange fragments encased in intrusive rock were probably captured by plucking, or stoping, during forceful intrusion of the felsic magma, now granite, in to the existing country rock…in this case, apparently, Littleton schist.
All told, the known sources of this particular granite in proximity with Littleton schist country rock indicate that it originated up to 75 km away, perhaps in the White Mountains. Consider the energy required for that movement. 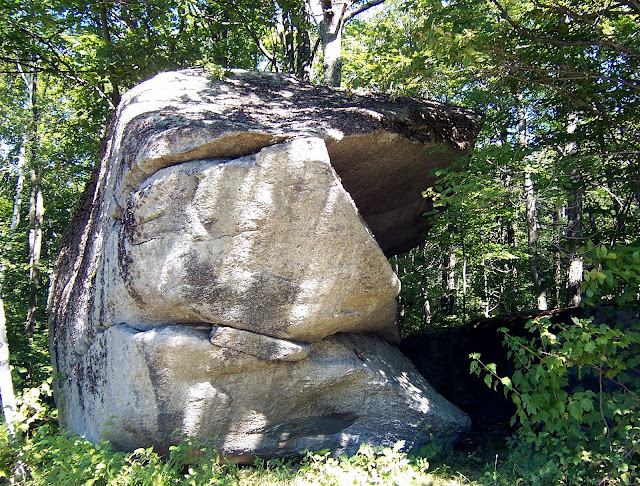 Granite glacial erratic on the Papoose trail. Note the dark fragment near the bottom, about 30-cm across, representing an inclusion of Devonian-age Littleton schist. 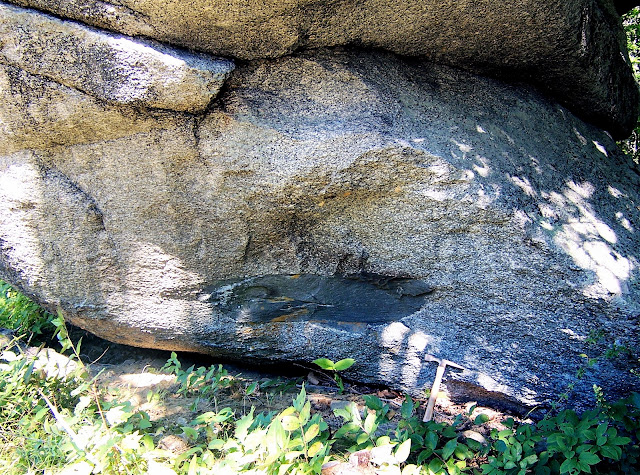 A closer look at the xenothith and the granite of the glacial erratic.