Chapter 5: Velvet Rocks.
The Velvet Rocks trail begins behind the athletic fields next to the Hanover Food Co-op. It is another easy hike, a walk through a pine and hemlock forest, and is part of the Appalachian Trail. The hike is mostly a gentle, one-mile, uphill to the shelter near the peak and about another mile, downhill, out to Trescott Rd. The rocks on the climb are often moss covered, hence the name. 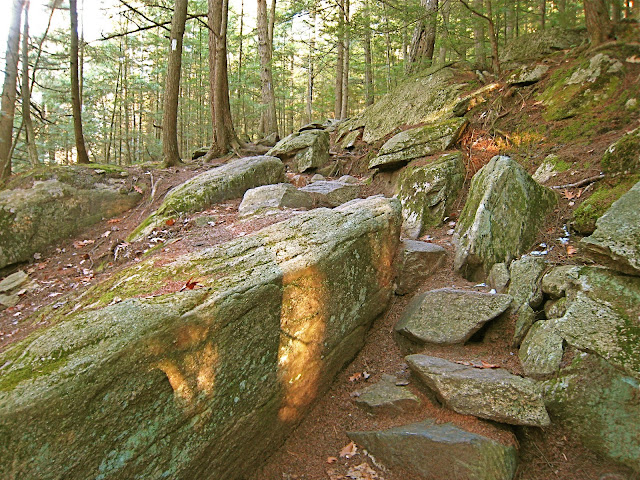 Velvet Rocks—mossy granite streaked with sunlight.
The boulders and outcrops that make up most of what we see are the surface parts of a granite dome, similar to that underlying the Dartmouth Skiway, discussed in Chapter 2. Unlike the Skiway, however, here the granite is extensively exposed at the surface. The Velvet Rocks granite is pinkish in fresh exposure owing to its rich content of potassium feldspar, named orthoclase. The characteristic hue fades in the weathered surfaces of the rocks as the feldspar weathers to kaolinite, a white, chalky clay. The granite is known locally as Lebanon Granite, and it comprises the Lebanon Dome, a small pluton intruding upon the widespread Orfordville Formation, a schist which is younger than the Gile Mountain formation discussed in chapter 3.
The Lebanon Dome and the Mascoma Dome, which underlies the Skiway, were both emplaced about the same time and are both Oliverian Domes. The Oliverian Domes extend like a long string of (ancient) pearls from north central New Hampshire, through western New Hampshire, central Massachusetts to Long Island Sound. The domes are thought to represent the magma chambers of an arc of island volcanoes, the Bronson Hill Complex, created during the first episode of Appalachian mountain building, or the Taconian Orogeny, which took place about 460 mya during the early Paleozoic.
With regard to the geography of that long-ago time, think (loosely) of the arc of volcanic islands making up the Indonesian archipelago and associated with the ongoing collision of the Asian and Australian Plates, which may result in Indonesia getting jammed into Asia.  The emplacement of the Oliverian domes was followed by later episodes of Appalachian mountain building, the Acadian (Devonian) and Alleghenian (late Paleozoic) Orogenies. The result of all three collisional orogenies was the closure of the ancestral Atlantic Ocean and the formation of the super-continent, Pangaea comprising parts of what are now North America, Europe, and Africa. Imagine Australia following Indonesia into southeast Asia causing a second continental collision and more mountain building.
The Acadian Orogeny supplied what would become New England with the rest of New Hampshire and Maine, which then were part of what is now Europe. The second event occurred in Devonian time, about 360 mya. The Acadian Orogeny deposited a second set of Domes, the New Hampshire series plutons, but that story is for another hike. A third orogeny, the Alleghenian, added Africa to the combination of the Americas and Europe and completed the amalgamation of Pangaea. That event was about 280 mya, but we do not have any local evidence of its occurrence. When Pangaea eventually split up, New Hampshire and Maine stayed behind like other, later European immigrants. 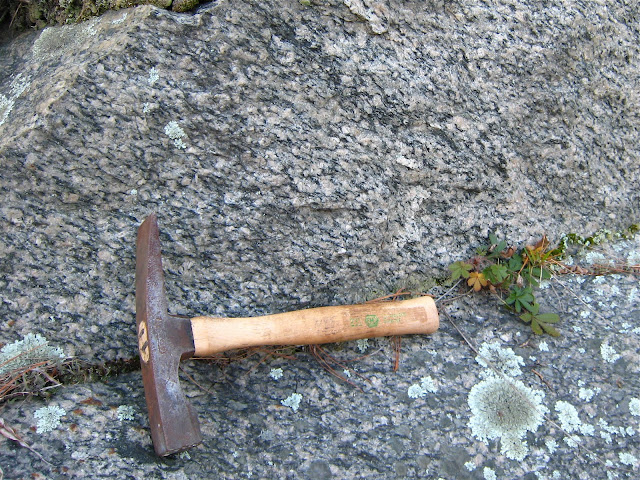 Lebanon border gneiss. Notice how the black mineral, hornblende, is formed in parallel lines indicating gneissic change from granite. [This outcrop is on Buck Rd.]
In the center of the Lebanon Dome is Lebanon granite. Encircling the granite is Lebanon border Gneiss, granite that has been secondarily compressed and has developed a banded texture. The original granite has a random distribution of mineral grains, but the gneiss is more striped in appearance. Encircling the border gneiss is Orfordville gneiss and surrounding that is Orfordville schist, which is the local bedrock. The Orfordville schist was metamorphosed to the Orfordville gneiss by the intrusion of the Lebanon Dome and the conversion of Lebanon granite to Lebanon border gneiss might have been part of the original intrusion process or might have occurred a little later during that second event. 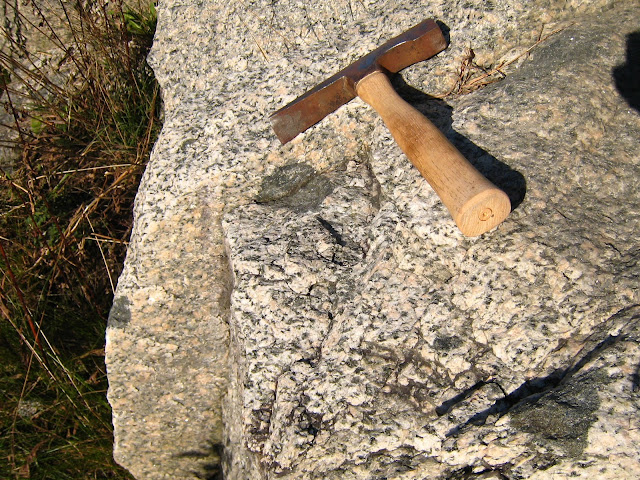 Lebanon granite. The hornblende is more random in distribution, there is a hint of the pink mineral, orthoclase, and three, gray xenoliths of Orfordville schist. [This outcrop is by Jesse’s Restaurant.] 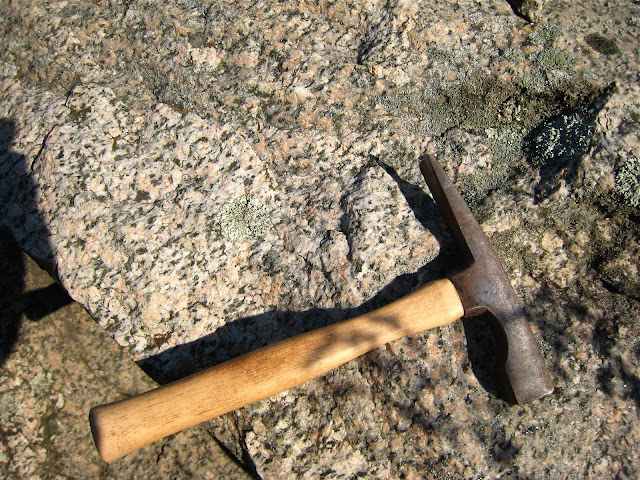 Another look at the Lebanon Granite with the pink orthoclase feldspar more evident. 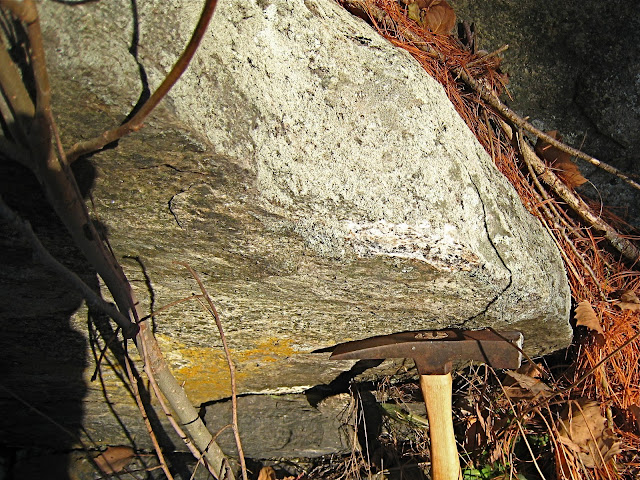