Chapter 7: Mt. Cardigan
Cardigan is a moderately difficult, but very popular day hike. The mountain is in south-central New Hampshire a few miles north of Lake Sunapee. The West Ridge Trail going up and the South Ridge Trail coming down are the most popular options. 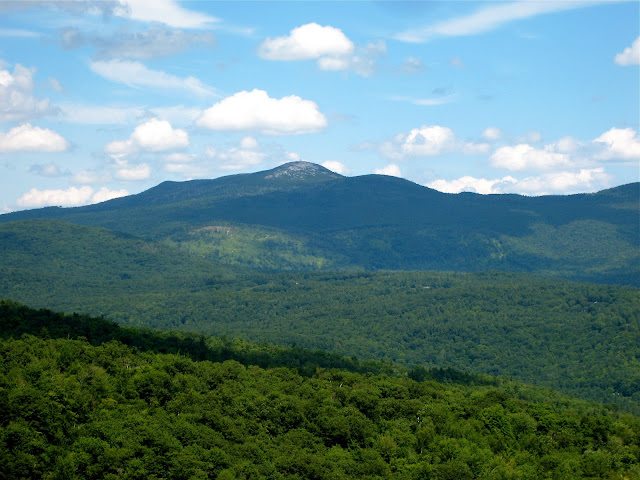 Figure 1. Mt Cardigan from the south with its exposed peak and fire tower.
The beginning of the West Ridge Trail is the usual walk in the woods with occasional exposures of bedrock. This bedrock is similar to a lot of the schist we have seen on other hikes, but there are some differences. There is generally less quartz in this schist. The parent rock of the Littleton Formation, this schist, started as deep-sea deposits of mud washing, eroding off the shore of the Bronson Hill complex.
The Bronson Hill complex was an offshore island arc, think of present day Indonesia, that was hammered onto and into the coastline of ancient North America during the Taconian Orogeny, the first event in the creation of the Appalachians, and the first event in the formation of Pangaea in the Paleozoic Era. The sediments eroding from this new shoreline formed deposits of sand, silt and mud. The difference among these deposits is that mud grains are the smallest and, thus, are carried further offshore by river currents before being deposited on the ocean bottom. The weight of a millennia’s worth of newer deposits laid on top of older deposits compressed the older, converting mud into mudstone and shale. The mudstones were later converted to metamorphic phyllites and schists by the second wave of mountain building, the Acadian Orogeny. If there had been more sand in the deposits that formed this rock, there would now be more quartz in the schist and it would look more like some of the other schists we have discussed. 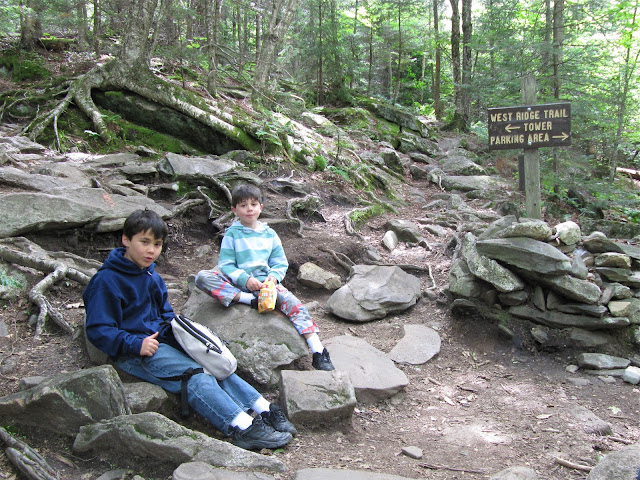 Figure 2. Littleton schist on the lower trail.
The Acadian Orogeny occurred when what is now Eurasia collided with what is now North America adding to the construction and elevation of the Appalachians. In what would become New England the collision sandwiched the Bronson Hill Complex, further changing the previously metamorphosed sediments, metamorphosing the previously deposited igneous plutons, and newly metamorphosing the sediments shed from the Bronson Hill Complex. Along with the metamorphosis of sedimentary rock, this second continental collision added new plutons and volcanics. 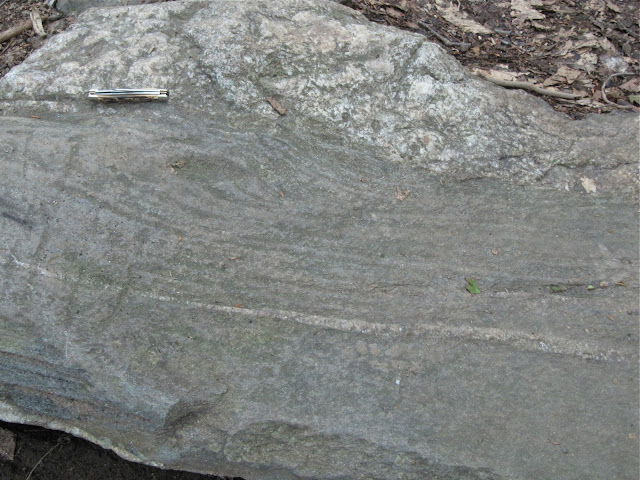 Figure 3. Contact between schist below and plutonic rock above and in veins. Knife for scale on contact.
The schist yields to igneous rock on the upper half of the trail, and many contacts between the different rocks can be seen. Further up the mountain, the trees thin out and extensive deposits of plutonic, igneous rock are everywhere. 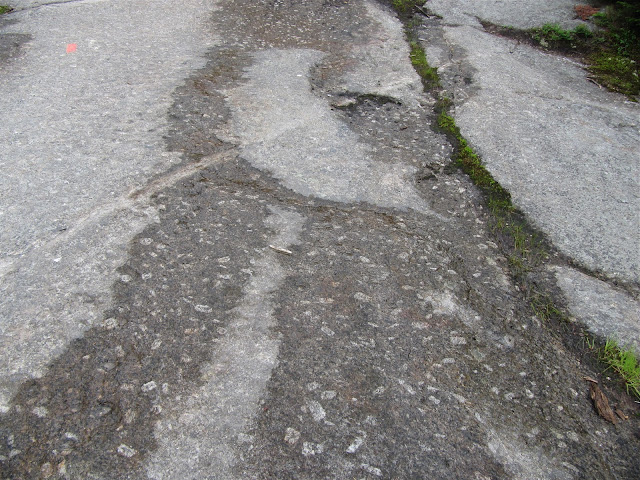 Figure 3. Contact between schist below and plutonic rock above and in veins. Knife for scale on contact.
The schist yields to igneous rock on the upper half of the trail, and many contacts between the different rocks can be seen. Further up the mountain, the trees thin out and extensive deposits of plutonic, igneous rock are everywhere.
The Cardigan Pluton is the largest in New Hampshire and is part of the New Hampshire Plutonic Series, which were created and emplaced during the Acadian Orogeny. We previously discussed the Oliverian Plutons from the Taconic Orogeny, the Dartmouth Skiway and Velvet Rocks sections, and the White Mountain Plutonic Series in the Ascutney Chapter. The Cardigan Pluton is 90 km long on a north-south axis and 20 km wide and 2.5 km thick. Mt. Cardigan is near the northern end of the pluton. 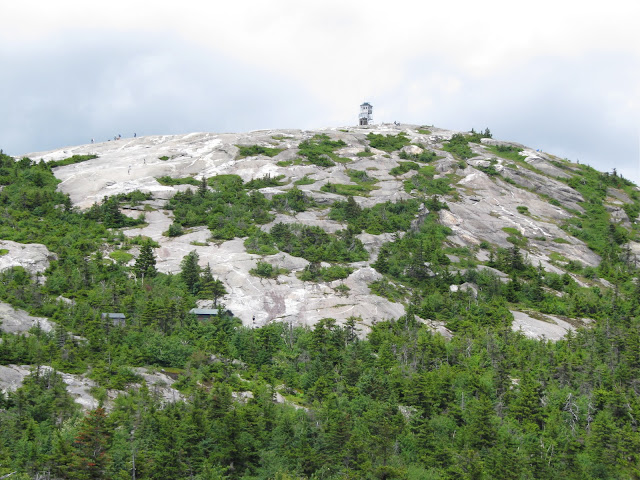 Figure 5. Top of Cardigan, northern face with fire tower. Look closely for dozens of hikers. Large veins in the granodiorite can be seen even in this broad view.
What’s up with the megacrysts, one might ask. Why are they so big and all the other crystals in the granitic rock small? Megacrysts, by the way, just means big crystal in a matrix of small crystals. They also occur in California in the Sierra Nevada batholith. Studies of those megacrysts, also potassium feldspar, concluded that they formed because the temperature of the magma melt in the magma chamber was held at the temperature that lets these crystals form by the repeated infusion of new waves of hot magma preventing cooling in the chamber and supplying new elements, silicon, oxygen, aluminum, potassium, for this crystal formation.
As a reminder, a pluton forms deep underground in a chamber of liquid magma. When the magma cools, minerals are formed as the temperature in the chamber liquid drops below each mineral’s particular solidification point until all the mix has solidified, quartz being the last to form. As the solid mass continues to cool, it contracts and cracks develop and widen. New upwellings of more magma fill the cracks. These secondary, and later, re-infusions of magma cool more quickly than the original because the large surrounding matrix is already cooler. Rapid cooling allows only for the formation of small crystals, which is why the veins look different from the main mass of rock. 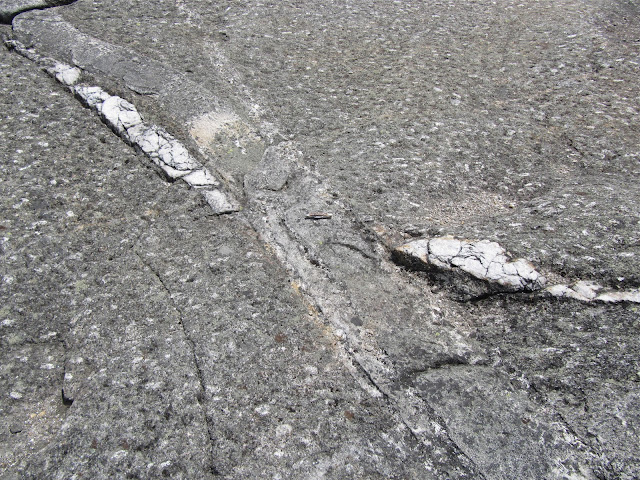 Figure 6. The knife is on a triple intersection. The white, quartz vein was cut by a vein of lighter colored granite and both were cut by a thicker, darker vein.
Pluton formation and metamorphosis, remember, take place many kilometers underground, but yet we see them on the surface, even on the skyline. Weathering and erosion, given deep time, can move a lot of earth. Removal of 1mm of soil per year equals 1 m in 1000 years and 1 km in a million years and 100 km in only 100 million years and, presto, you’re standing on a pluton. This pluton formed in the Devonian about 400 million years ago.
Fast forward to the Pleistocene and the last Ice Age. Glaciers swept southward from Canada eventually covering New England in ice up to 3 km deep. The glacier planes up the northern sides of the mountains like a bulldozer leaving behind fairly smooth topography like we see here on Cardigan. After the glacier crests the peak, it plucks and pulls rocks off the southern face leaving a rough, steep topography. Carpenters, think of trying to plane across the grain of the end of a 2x4, all you get is cracks, chips and splinters. 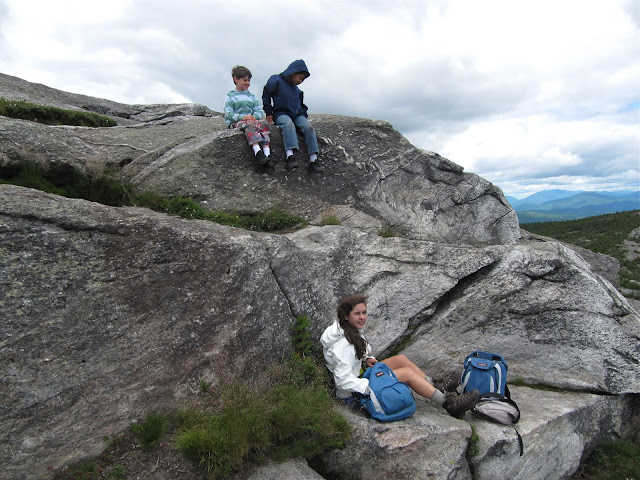 Figure 7. South side of the top with nooks and crannies from glacial plucking. This is a good place to lunch and escape the wind.
This effect of the glaciers is called roche moutonnée (French for ‘sheep back rock’) and is quite common in New England.
Fast forward again to the present and ask why this medium sized mountain seems bigger than it is. The bald summit, of course, reminds us of Mt. Moosilauke, for instance, which is several miles to the north and 4802 ft [1464 m] high and only treeless on the top 100 or so feet. Cardigan at 3155 ft [962 m] should be treed to the peak. It used to be so, but a forest fire in 1855 burnt all the upper vegetation. Probably, if we poked around in the crevices and cracks on the top, we could find traces of charcoal, but none is readily visible. There must have been tons of wood ashes and cooked soil, but it is all gone, erosion at work. Re-growth has occurred, but in 155 years there is only scrubby growth near the top. Some of those cracks in the rock in the last picture may have been caused by the heat of the fire.
References Mt. Cardigan:
1.  James G. Moore, Thomas W. [2008] Igneous phenocrystic origin of    K-feldspar megacrysts in granitic rocks from the Sierra Nevada batholith, Geosphere 4:387-400.
2.  D. M. Kerrick, [1969] K-feldspar Megacrysts from a Porphyritic Quartz Momzonite Central Sierra Nevada, California, American         Mineralogist 54: 839-848.
3.  Terry Plank, [1987] Magmatic garnets form the Cardigan pluton and the Acadian thermal event in southwest New Hampshire, American Mineralogist 72: 681-688.