Chapter 4: Gile Mountain.
The climb is easy—one often sees small children with their parents doing this hike—and is well worth the view from the fire tower at the summit. The geological features of note on this walk are archetypal exposures of one of most common rock types to underlie eastern Vermont in the Dartmouth region—the Gile Mountain Formation—the sedimentary origin of such rocks, and the extent to which they have been shortened during subsequent deformation. In addition, one can get a feel for the surrounding landscape from the fire tower at the summit.
The trail to the Gile Mountain summit is accessed from a public parking lot at the end of Turnpike Road in Norwich. The lower part of the trail immediately above the parking lot is gentle and few outcrops are visible. The upper part of the trail approaching the summit is steeper and where one will encounter numerous outcrops of Gile Mountain formation.
The Gile Mountain Formation extends in a roughly north-south belt bounded on the east by the Connecticut River, and extending west to about Pomfret, VT. Other noteworthy exposures include the wonderful outcrops along Rte 5 in Wilder, VT. The rock at that roadside locality is rich in dark slate with interbedded slightly lighter-gray quartzite, giving it a ‘pin-stripe’ appearance. That particular subdivision, or member, of the Gile Mountain Formation is called the Meeting House Slate. In general, however, and especially so on Gile Mountain, the Gile Mountain Formation is described as tan schist rich with quartz and biotite mica. In other places, however, the Gile Mountain Formation is grayer in color, exhibiting not only the typical mica-rich schistose texture, but also the sheen typical of phyllite. Thus, its informal, hybrid designation as’phyllitic schist’.
Moreover, in easternmost outcrops, in and around Norwich, for example, the Gile Mountain Formation seems relatively fine grained and was exposed to sufficiently high pressures and temperatures that a telltale mineral, garnet, diagnostic of such conditions, is readily seen. Look for the garnet as blood red to brown crystals ranging in size from 1mm to 1cm. These crystals are so common in places that the rock will appear ‘knubbly’ or ‘pimply’ to the eye and to the touch. Outcrops of this formation farther west in Pomfret show more calcium containing rocks suggestive of shellfish beds in the original sediments. The garnet crystals are gone, but kyanite crystals are present, and they indicate a lower degree of metamorphosis.
Examine outcrops as you come across them for the typical schistose texture with finely spaced planes of parting, or cleavage and the garnet crystals. The rock weathers and flakes off along the cleavage planes. Also note the presence of whitish quartz veins throughout the rock. The quartz is more resistant to weathering than the host schist and so stands proudly from the surface of the tan-gray rock.
Also note that the quartz veins appear in places to be twisted and folded. The direction and degree to which the rock has been compressed overall can be obtained by comparing the crumpled length with the original length of the vein before shortening. Some examples are shown in the accompanying photo. 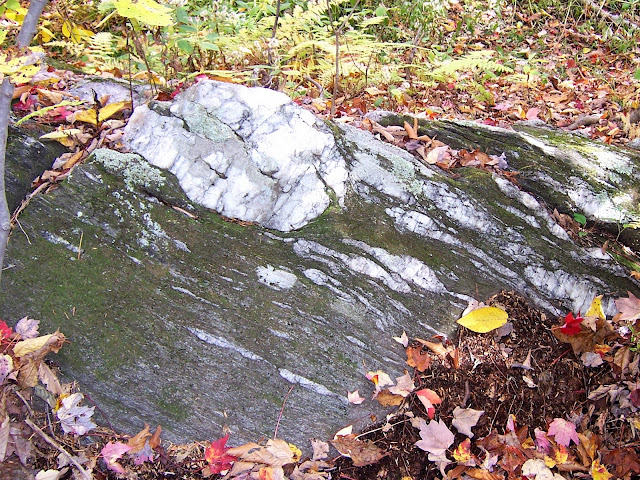 An outcrop of the Gile Mountain Formation. Note the leaves for scale. Note, too, that some of the white quartz veins, including the largest one, have been crumpled into ‘S’ shapes. As an indication of the amount of shortening this rock has been subjected, mentally lay a string along the bent quartz veins and then straighten it out. It would be 2-3 times as long. The rock has apparently been compressed laterally to about 50 percent of its original length. The direction of shortening is more or less east-west, or left-right in this image.
This rock, now located in central Vermont on top of a small mountain, was formed from ocean sediments that accumulated off the coastline of the North American continent which was then in the tropics south of the Equator. These sediments were eroded from the land and carried off shore into the ancestral Atlantic by rivers that no longer exist and were deposited on that continental shelf as horizontal layers of mud and sand. As new sediments accumulated on top of older ones, the lower ones were compressed and pore spaces between the grains of sand or mud were closed by the weight of the newer, added material on top. This compression turned mud and sand deposits into mudstone and sandstone, sedimentary rocks.
The alternating layers of mud and sand develop because mud particles are smaller than sand and are carried further off shore by the river currents. A severe storm with a large river discharge could carry coarser sand, or gravel, further away from the shore than usual and dump it on previous deposits of mud. If the ocean level rises, say from glacial retreat, a particular site off the coast ends up in deeper water further from shore and thus gets finer deposits. That site might later on end up in shallower water just from the mass of accumulated sediment extending the shore line seaward, and then receive coarser, sand deposits. It may seem obvious, but when deposited, the layers are originally horizontal and newer layers are on top of older layers. 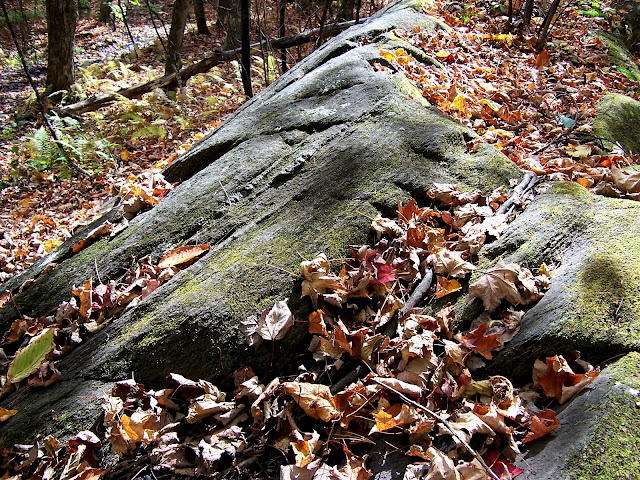 The foliations of white quartzite were originally sandstone, and the grey schist was originally mudstone. The quartzite stands out because it is more resistant to weathering.
So how did the layered mudstones and sandstones get changed to quartzite and schist and then end up tilted on its side atop an inland hill? The answer is that under the ancestral Atlantic Ocean geology was happening. One side of the ocean bed was subducting under the other and, consequently, shrinking the width of the ocean bed. This shrinkage had the effect of drawing together the continents on opposite sides of the ocean bed. These other continents were ancestral Europe and Africa. In the area of subduction, volcanic activity created an island arc landmass like present day Japan, which we can call New Hampshire. Continued convergence plastered it against the North American continent. Europe and a bit later Africa also collided with North America as the ancestral Atlantic vanished and its bed became part of the Appalachians. The final construction was the super continent, Pangaea which formed in Devonian time.
The process of collision obviously happened slowly, but consider the momentum of continentals ramming into each other. That force buried, heated and compressed the sedimentary rock converting it, metamorphosing it, into quartzite and phyllite and schist from sandstone and mudstone.
Picture a package of printer paper, unwrapped, sitting on a table as a surrogate for layers of rock. Compressing it by squeezing the sides, call them east and west, forces the paper to either arch up in the north-south direction or sag down like a trough. When this happens with sedimentary rock layers, the arches are called Anticlines and the sags are called Synclines. Continued pressure can tighten the fold into a hairpin shape and even lay the hairpin on its side. In this last case half of the layers would now be inverted with the younger ones underneath the older ones. Folding of this sort occurs if the rock is malleable, ductile, enough to bend which happens only when the rock is very hot and deeply buried. Cold rock at the surface of the earth similarly stressed would fracture and shatter. Anticlines are also formed by plutons blistering and lifting a layer of rock as they intrude on it from below.
The Gile Mountain Formation is also found further west in Pomfret, Vermont, but separated from the part of the formation that we see on Gile Mt. by another, older schistic formation, the Waits River Formation. How could the Gile Mountain formation be split like this? Go back to that humped up stack of paper, now slice off the top of the arch parallel to the tabletop. This leaves paper from lower in the stack on top of the remaining part of the arch and the sheets that were on the top are now cut apart and lay on the sides of the arch. The Gile Mountain Formation was part of a large anticline and the Waits River Formation, which is older, was also part of the anticline, but beneath the Gile Mountain Formation. 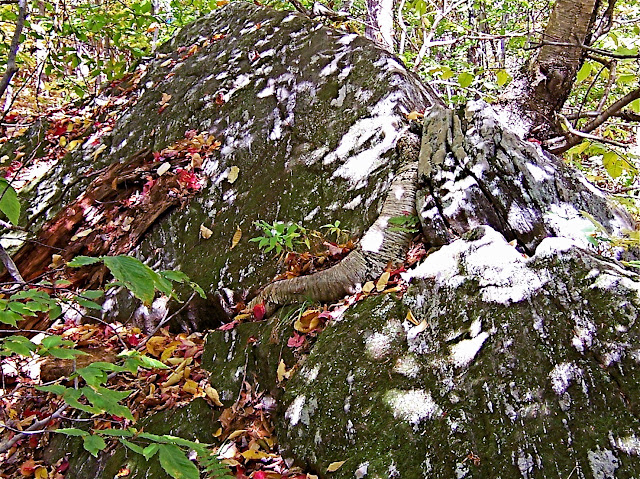 This tree root is splitting the rock, partly with the foliation and partly across the foliations.
What followed the uplift associated with this collision was millions of years of weathering and erosion resulting in the landscape we see today. One of the most dramatic agents of erosion in the last 2 million years was the continental ice sheet advancing south from Canada. Evidence of their action here is seen in the accompanying photo of an outcrop of Gile Mountain Formation along the power line cut that crosses the trail, but uphill a bit from the trail crossing. The schist and quartzite and foliations are evident as described above. The foliations angle downward from the top of the picture. The deeper gouges that are parallel to the foliations were carved out by one or more of the ice sheets that once covered New England and beyond. 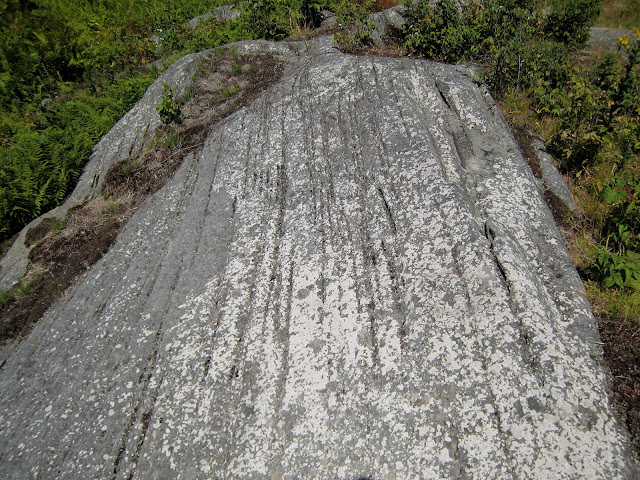 Gile Mountain Formation schist with glacial scoring. The field of view is about 1-m across.